My letter to AEP, as requested by some tree hugger

I posted this to Facebook in June, but then realized that not all the people I know are on Facebook, so to share with the world.....taaadaaaa!!!!!

My door was open, so she didn't see the "go away" sign. This little girl asking me to join her cause of getting AEP to clean up it's coal fired plant somewhere in Ohio. blah blah blah. I signed it. Then she asked me to write a letter to the CEO of AEP on their behalf, have it taped to my door at 8pm tonight. HA! like I have time for this crap. So I wrote a letter, which I will re-type here (it was handwritten)) as I'm sure it won't get to the CEO....

Today was a humid and miserable day. My house was full of hot and miserable children, whining over who got to play the Wii next. Except for the two year old, who was just whining. I had my front door open, waiting for the parents of three of those kids to show up. Because of this, my "NO SOLICITING, SOYLENT GREEN FACTORY" sign was not visible.

The most adorable, bright-eyed, true-believer named Claudia appeared on my doorstep. I just could not crush her spirit as she was out in this oppressive heat and she was so passionate about her cause. I listened as she told me about how AEP has until 2015 to clean up or replace the Muskingum River Power Plant. I don't know if she is from that area, but her care for the people and environment in that area was worn on her fresh and enthusiastic face.

I'm from Nebraska, however, and couldn't really give a cow's booty about the Muskingum Power Plant. I don't even know where that is. She asked me to write you a letter. I'm a busy person. I don't even have time to pee by myself without doing 5000 other things. In fact, I'm using time set aside to go buy a new bra just to write this letter to you. I really need a new bra, but the thought of crushing Claudia's spirit took precedence over my breasts, which are a lost cause anyway.

So, here it goes: Please do what is required of you in the 2007 lawsuit settlement. Procrastination is an ugly habit to get into. Take my advice, get workin' on this now. Let the environmentalist whackos know what you are doing along the way so sweet girls like Claudia can stop walking the streets and get out into the corporate world, where her spirit can be properly crushed.

As far as what to replace coal with, I really don't know. Nuclear, biofuel, millions of hamsters on millions of wheels, it makes no difference to me as long as my house can stay meat-locker cold in the summer, I'm happy. I would avoid wind power, besides all the birds that die in high speed propeller collisions, what happens when the wind stops blowing? I've seen it happen as I drove across Iowa, so I have to wonder about that.

I hope this letter finds you doing what you were court ordered to do. Now I'm going to start working my second job. I hope you appreciate the sacrifice my tatas made for you tonight.

I doubt she will pass that letter along, but hey, I wrote one for her!

I was not meant to be a single mother

Foster 4 basset hounds? Sure no problem! Babysit 7 kids 5 days a week? Sure, I'm cool with that! Add 15-20 hours of data entry work on top of all that, plus cook full breakfasts, lunches and dinners? Keep all the overflowing clutter in the corners and the floors hair and food free? Sure! I can even get the laundry done (but not folded or put away) I can do all of this, every day for months. But take care of my own three kids while my husband is out of town for 5 days?

Right now I have about 36 hours until he comes home. Could be a year for all I know. Baby Eebo has been up for 2.5 hours already, is sitting in his high chair, with a pair of salad tongs, eating warmed over fries and chicken chunks, the breakfast of champions. The other two are asleep. There is not a single square inch of floorspace visible between the toys, dog hair and the cheerios that Buddy spilled some days ago. The dog doesn't like cheerios. But I had a crapload of work to do...... and by the end of the day, the baby was still going strong, so I neglected the house and tried to just stay alive.

Now I have two hours before his Early Intervention teacher will be here. No shower for me today, thank God I got one in yesterday. I suppose I should get after it.

How do single moms with toddlers do it? I can handle Bug and Buddy, they are easy, but Eebo....holy crap that kid is busy.

tip toe back to the blog

Slowly, slowly, but surely, I'm tiptoeing back to the blog. I've been in a creative rut for the past, oh..year or so. But as my muse matured and left me with fewer moments of incredulity, the little one has entered into the muse arena.

I speak of Little Eebo, 21 months of destructive fury. A walking, babbling reminder of just how hard it is to be an old lady mom.

Today we did not have to take Blondie (the little girl I babysit) to school, so after we put Buddy on the bus, Eebo and I headed to the store. He drifted off to sleep just as we arrived at Wal-Mart.

Normally I hate Wal-Mart, but today we were there before 9am, and it was devoid of customers. Nice wide bright aisles, all the products are fully stocked, the produce guy found me the best looking bananas, steered me clear of the "old" grapes and ran to the bakery to get a cookie for Eebo. I had workers putting heavy things in my cart for me, getting things off shelves for me, it was like being Princess of Wal-Mart!

Sadly, Eebo ate the cookie quickly, and because he had been awakened from a dreamland so abruptly, he was cranky. I had to keep him busy, so I handed him a baggie full of Cheez-Its. Eebo loves Cheez-its, he could eat his weight in them every day if I let him. Today was different.

Perhaps I should have known something was up, because he didn't try to climb out of the cart a billion times. he didn't squeeze the bread into unidentifiable gluten balls, or throw the eggs out of the cart.

Alas, I was so intent on getting my shopping done while he was being docile, I didn't notice until it was too late what was keeping him docile.

We worked our way to the back of the store, and as I retraced my path to get something i had forgotten I stepped on what I discovered was a Cheez-It. Then another, and another. Finally I looked around, it seems Eebo left a Hansel and Gretel trail of Cheez-Its throughout the store.

I confiscated the bag to the loud protestations of one angry toddler and headed to the checkouts, avoiding eye contact with the people who were dispatched to clean up the Cheez-It trail.

We checked out quickly and without incident. But, not to be squelched, as I was putting my wallet back in the diaper bag, Eebo snatched the Cheez-It bag and in one giant Blaze of Glory he dumped the entire bag onto the floor in one giant orange pile.

We quickly exited the store. This was a mild little episode, but I know, this is just the beginning......
Posted by Amy at 1:25 PM 2 comments:

a not- great video of Ian escaping tummy time and then getting irritated when I roll him back into it, showing him at a young age that I am the meanest mom in the world.

A friend sold me his jumperoo, has a few missing toys, but as you can see, he doesn't care. His first outing lasted 103 of nearly nonstop jumping. He didn't want to get out of it. When he does become a movin' baby, we are in for a world of hurt! 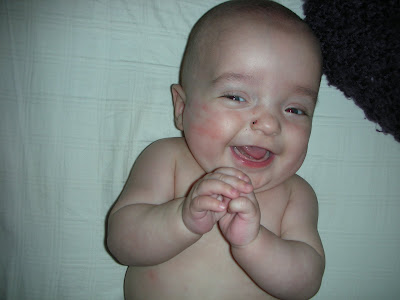 Isn't he just the cutest thing ever? Yeah, that was last week. Then we found out that we had H1N1....the dreaded flu. Bug is the only confirmed case in the family, the rest of us were diseased by association.

He had a little cough for a few days, felt a little warm, but was breathing fine and eating like normal, no worries. Then Saturday came....why is it always a weekend?

He was crabby, he didn't smile, his little head bobbed when he was breathing. He didn't want his pacifier, he only wanted me. All day long. The only thing was I came down with it Friday night so I was dying all day too. With a little remora stuck to my chest. We called the clinic, and they put him back on the oxygen. This seemed to help him be more comfortable. And so did the ibuprofen, although that did nothing for his fever.

Finally he settled down and went to sleep. then at 11:30 he woke up with a croupy cough. Steam...freeze...sleep....steam...freeze....sleep all night long.

He stayed on oxygen on Sunday, I took him to see the pediatrician on call (not wanting to go to Children's...the ER is a cesspool of germs) she wrote us a script for prednisone to help with the inflammation around his larynx which caused the stridor, that he still had a bit, even though the cough disappeared at sunup (I swear that croup is the pre-cursor to vampirism.......)

Super G has not fallen ill as of yet. I cannot believe it, he either has very good luck, or a cast iron constitution. Either way, he better watch out. I was holding/nursing/praying Eebo into a nap today, watching a show about the Middle Ages and Charlemange. Of course he beat back the Moors with no problem etc etc, but who gave him the hardest time? The Vikings!

Discussing how mean and nasty the Vikings were, they took a traitorous man, tied him to a table, broke open his rib cage and splayed out his lungs like wings.....all while he was alive. Be warned Super G, these are my people. Be afraid, be very afraid.....

(okay so those were Danish Vikings, I'm sure the Swedish ones just killed everyone with their lutefisk or something. whatever, the point is that he may have escaped this illness, but he can't keep skating by forever!)

Little Eebo is waking up, must return to my role as a remora host.

How The Hell Did I Get HERE? 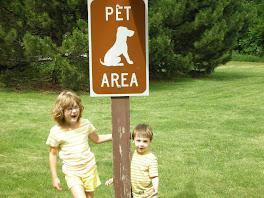